Be sure to visit our Facebook page to keep up with the latest developments and news! The Imperial Gunnery Facebook

Watch out! New repros have recently entered the market place. A well-known repro maker has starting selling a range of new reproduction accessories on eBay. These accessories are cast in plastic and have good sculpt details. All of them sink when placed in water. The blasters are available in Blue and Blue/Black. TIG will update the individual sections with more information as we receive it.

TIG has updated the Princess Leia Blasters section with new information and additional pictures for the V1 to V4 originals.

Teebo Battle Horn with letter "B" added to the archive.

TIG is pleased to announce that our Identification Guide is now back up and fully running following the last site upgrade in which many of the links and images became broken. Big thanks to TIG staff member Mat for fixing this excellent and valuable guide for vintage collectors.

Other updates: Floating Repro V5 Luke Bespin / Jedi Sabers added to Lightsaber section ** Original Luke Bespin V5 Saber reinstated ** Original V2 Imperial Blaster Rough Texture No EPM version added ** Teebo Battle Horn Letter H added ** Leia Endor Helmet Number 2 added ** Repro Palace Blaster V2 image and info updates ** Repro ERG V3 Staff added ** Original ERG V3 Staff added. Visit the individual sections to see.
Updates October 10th 2017
Floating Repro lightsabers - not all of these have the distinctive line at the bottom part of the rectangle that surrounds the three buttons as we previously identified. Some are the same as originals. We have identified some additional tells and these are: 1)  a slight difference in the angle of the guard as it extends outward from the handle. 2) visible lines running the entire length of the blade.
Updates October 1st 2017
Floating Repro lightsabers hit the market.
Floating repro Luke handheld sabers in green, yellow and blue have hit the market. The best way to tell these apart from originals is by the line at the bottom part of the rectangle that surrounds the three buttons. We will fully update our lightsaber section soon.
Luke Bespin Handheld Yellow Saber V5 Original to be added to the archive.
Update September 3rd 2017
New REPRO floating Imperial Blasters V11 and Jawa Blasters V6 hit the market. Visit the individual sections to find out about these repros. Also updated, Princess Leia Blaster Floating V6 repro

We are honoured to present Lee Bullock's paper on the infamous float test! Click below to read the article on Imperialgunneryforum.com and help us join in giving Lee a very big round of applause for an amazing look into the science behind the test!

A large number (1000+) of Leia blasters were recently uncovered in the UK. They came with a back story of being found at the Palitoy factory garbage bin by the son of an employee as well as being replacement stock for the 'Kenner really do care' program.

A number of collectors have been researching these for many weeks.  The explanation of how these pistols were discovered is mainly irrelevant to authenticating them as original. In order for TIG to be comfortable deeming these as original we expected an example to be found sealed in a MOC/baggie or exist previously in collectors hands. To date, with help from the community we have examined 1000s of loose pistols and 100s of MOCs - NONE have been found with this specific mould/shape.

Steve at UKG has also kindly offered his opinion : "It's a fake it is one of the best i've seen and a really well done job but under the microscope and even to the naked eye there are notable differences to it, i've had the verniers on it too and some slight differences around the entire mould."

Click on the logos below to visit the guides

PLAYMOBIL WITH A STAR WARS TWIST PROJECT OUTSIDE THE BOX 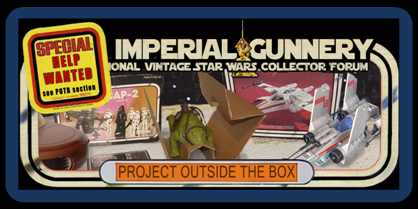 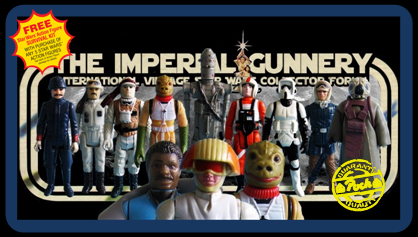